The Oilers got whipped last night by a strong, contending team, showing us once again how far away they are from actually being a competitive team in the difficult Western Conference. The Blues shelled them 6-0, and the worst part for those of you who are unfortunately Oilers fans is that there was a complete lack of effort by the team after the first period.

It looked like they didn’t care, like they were watching the clock just hoping to get the game over and done with.

That lack of compete has been the death of this team all year. Sloppy line changes, weak defense, and a usual brutal goal given up by whichever goalie has the misfortune to play that night. It was ugly. There were a lot of people who were starting to get excited about this team again after they had a 7-3-1 streak; the fact was that this was against poor opposition. In their last six games, against competitive teams, they are 0-6. And generally looked pretty bad while doing it. The almost snuck one out against a napping Ducks team, but overall, the big guys of the West can push around this team to their hearts content. And not fear any repercussion.

Look at how David Backes pushed and shoved the Oilers all over the ice last night. Nobody stepped up to challenge him, so why on earth would he stop? 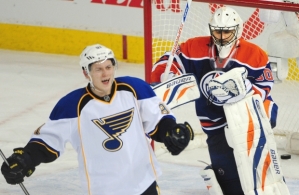 A running joke has been Craig MacTavish and his BOLD moves. So bold, that he is getting conditional 6th round picks for AHL players? How is that bold? When will the organization begin to see that so much is the fault of Kevin Lowe and his poor management of this team, that it trickles all the way down to the scrubs they are putting on the ice night in and night out. Time to look at real trade options. Could they get a definite #1 D for Taylor Hall? Time to explore the possibility. With no real assets on the team (let’s face it, Oiler fans, nobody is lining up to trade for Nail Yakupov, Ales Hemsky, or Sam Gagner, despite the perceived value fans here have placed on those players), it’s time to look at the most valuable players, and see if an actual NHL team could be built by moving them along. Does anyone want to trade one of the better left wingers in the game? Nope. But teams would pay dearly to get him. Multiple pieces is what the Oilers need, since they are definitely not one or two players away from competing. There are a dozen glaring holes. If you can get three roster players for Hall, isn’t that something that needs to be explored?

The Blues showed what a team with depth looks like. A team with size and speed and skill. And toughness. And teams like this will keep beating up on the Oilers until something drastic is done.