The Ale Yard has some good things about it, and some that make it seem as though this place is doomed to failure, as was its location predecessor, Don Cherry’s. While this pub and grub spot seems to have an ideal location, at 13310 137th Ave in Edmonton, it really isn’t. It is on a main drag, and it really isn’t that close to a large residential population, which makes it more of a place to stop on the way home for a pint and a bite, instead of a place where you will spend the whole evening. Now, this does afford it some charms, such as it really is never that busy, allowing for fast and friendly service from a great wait staff (they really are awesome, and they take the time to know their regulars. Even new waitresses will come and introduce themselves if you are recognized as a frequent visitor), but it lacks the party atmosphere of a more Whyte Ave type of pub, if that’s what you’re looking for. 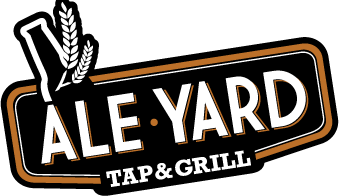 The food at Ale Yard is as typically pub grub as you can imagine. The food is standard, and tastes like you would expect. It is no different from anywhere else in the city. However, they do have some of the best french fries, and for some reason, the chicken fingers from their appetizer menu are particularly delicious. Also, they have solid chicken wings, with some inventive flavors that are actually pretty good. These include tandori chicken, and butter chicken. Doesn’t seem right, but they are pretty damn good. Aside from that, you won’t find anything new here. You get what you pay for, and you get what you expect.

The drink menu is a strong point for the bar, one that I feel needs to be built up more. They have a great selection of beers, ranging from your standards, to a decent import list, to a strong selection of local “Premium” beers. The prices are fairly normal, but it is best on a Thursday, where half-pints are only $2. Otherwise it can get a little silly paying $6.75 for a pint of Keiths. 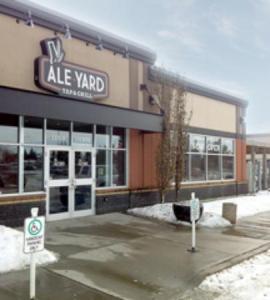 It seems apparent that the Ale Yard is too big of a place for its operation. I feel it would be better served if it were cut in half, and they avoided some trappings of the neighborhood bar, like karaoke night. Dump it. It doesn’t get the crowd any bigger, and when looking for a calm pub, it kind of ruins that atmosphere. Don’t try to be a dance bar on the weekends. Just because there is loud music, it doesn’t mean that people are going to pack a dance floor. They don’t. And a dance bar is not what the area needs. Ale Yard should be focused on competing with other beer-centric places, such as Beer Revolution or Kraft. The Ale Yard really can’t decide who it is, and its identity is one of throwing many things against the wall and hoping that something sticks. For a real boost, they need to cut the size, focus on improving their food to the point where it is something different and original, and then I feel they would be a stronger draw. It is a good place to hang out, but it could be better.

I’ve checked out many of the reviews for the Ale Yard on Yelp, and notice that many of them are negative. And even though this is a place I like, I can’t disagree with them. Although I have always received great service, to the point where some waitresses know my friends and I by name and will often sit for a quick chat, there are times I could see them being too slow for some customers based on how packed the place is(n’t). Many of the reviews comment on the food, which I agree with. But this is a pub. I don’t expect anything more than standard fare. And the prices are average, not the best. You just have to know to hit the deals on certain nights of the week, and it comes out being reasonable.

When it comes down to it, the Ale Yard is a good place to hang out, have a couple of beers and a snack. If you go in expecting something amazing, you may be disappointed. For a regular pub, it pretty much ticks all of the boxes.