Everybody knows how this will all end…

But before Marion Crane comes to check in at the Bates Motel and has the shower that nobody will ever forget, there is an entire story to tell about the Bates family.

Bates Motel lets us into the lives of Norma and Norman Bates, the most unusual mother-son combo we may ever know from film. And the show lets us see how truly dysfunctional and messed up they really are. From Psycho, we know the hold that Norma had over her son, and the irreparable damage that she caused her son, leading him to a strange life of murder. Here, we get to see how that is developed, and how Norman came to be the way he is.

And it is done extremely well. The acting in this show is very strong, led by Vera Farmiga playing Norma. She is unbalanced, and can convincingly switch for caring to psychotic and overbearing in the course of a few well-written lines. She is a loving mother, but too loving, and too concerned with keeping her son close to her. There are many scenes throughout Bates Motel where we can tell ourselves, “Oh, yeah, that’ll turn him into a killer.” Farmiga is convincing, but manages to maintain Norma as being a sympathetic character for the most part, especially in the first half of the first season. Having recently lost her husband (and we found out how he dies), we see her buy an old motel where she and her son can move, in order to start their lives over again.

It doesn’t take long before we see how ferocious she can be, and how determined she is to keep her family together, safe, and out of trouble. This will cause her to infringe on the life of her son in many ways, including the classic mother guilt trip, which she enacts to perfection. 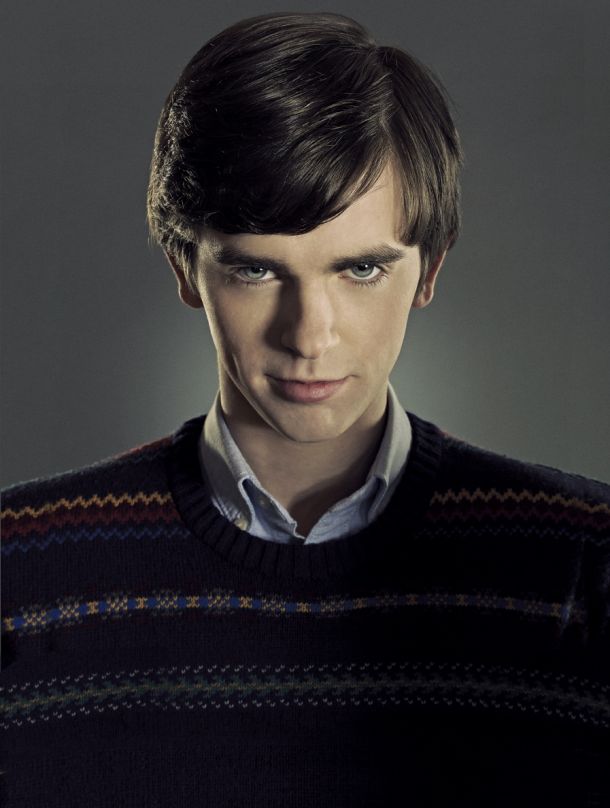 Norman, her second son (her first son appears as well, who is Norman’s half brother from another father), is the one who suffers the majority of the consequences of her actions. When Norma gets angry, it is Norman that feels the guilt, and the idea that he will let her down, or disappoint her, is something that drives a large number of his actions. Norman is also acted brilliantly, by Freddie Highmore, who I mostly remembered from Finding Neverland. He plays the role with the perfect amount of creepiness, blended with awkward teenage behaviors. You cannot help but feel sad for Norman, because we are witnessing what he has to live with on a daily basis, and everybody knows that at some point in his life, he will end up stabbing Marion Crane in the shower, before returning to his creepy mansion to check on his dead mother in a rocking chair.

How does a person become so dysfunctional is what is primarily explored in the series, and it does well. There is so many nods to the famous Alfred Hitchcock movie, and it feels as though the characters are true to what he may have envisioned as their back story. Despite being set in modern times, the show plays like it has the same end goal in mind, and it would not be a surprise to have the series eventually wrap up with the moment that Marion Crane checks into the motel.

Highmore convinces us that the damage heaped upon him in childhood is enough to destroy his future life, and turn him into something evil. But there is more to Norman that just simply being the ultimate mamma’s boy. He has issues on his own, that go beyond social awkwardness, and a desire to please his mother. He struggles with his anger, and has rage-induced blackouts, which will obviously play a paramount role in how this series plays out.

There is plenty of intrigue in the show as well, maintaining a Hitchcockian level of suspense through each episode. There are other storylines at play here as well. The Bates family coming to a new town, trying to get the motel up and running, a plot of human trafficking, Dylan gaining employment with a drug ring, Norman falling for Bradley, the most popular girl in school, and his friendship with Emma, the daughter of a taxidermist, who is suffering from cystic fibrosis.

There is much to love about Bates Motel. It is well thought out, interesting, a little bit creepy, and always suspenseful. Backed up by such strong acting and stories, this is definitely a show that warrants a watch, as well as waiting for the second season to be released on to Netflix as well. I will anticipate the next binge viewing session that this show deserves.