Shawn Fanning and Sean Parker changed the world. There is no way to even argue that. With the development of their Napster software in the late 1990’s, they managed to change the way we listened to music, and in turn, they completely changed the music industry, the effects of which are still being felt today.

With the concept of peer-to-peer sharing, users were able to access the hard drives of all Napster users, and download music from them. For free. This allowed people to build up massive collections of mp3s that they would have never been able to afford had they been forced to go out and buy all of that music.

The advent of Napster also created a massive war in the music industry, as some were in favor of people being able to “share” music, while others were completely against it, as it was a form of stealing and piracy. Basically, at its core, Napster was copyright infringement. 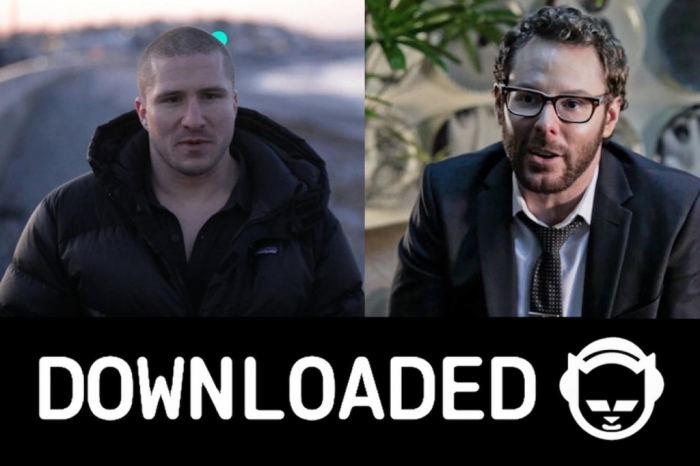 Downloaded is a documentary that tells the story of Shawn and Sean, and their meteoric rise to the top of the music world. It is fascinating, how people with no training came up with an idea, then worked endlessly to get it to work, to the point where it had millions of users worldwide. The movie provides us with tons of interviews, both then and now, of the main players in Napster, and the controversy it sparked.

The interviews are insightful, and we get a complete picture of the story of Napster. From its beginnings, to the rise and height of its fame, to the massive fallout when it was shut down by the courts. There are legal ramifications, as well as financial ones, to the point where the music industry began suing thousands of users of the service, usually winning the cases, and collecting an average of $4,000 from users.

I liked that this documentary described what the guys were doing in detail. It doesn’t shy too much away from the technical aspects of it, allowing us to understand how Napster worked. It also uses a lot of archival footage from the time, especially the court battles, which adds more realism to the story telling. This not only allows us to hear people reflect on the impact of Napster, but to see the circus it had created at the time, and how it was, in fact, changing things.

It is also very interesting to learn a few things about the service, such as that the founders never made any money off of it. Creating something that millions of people use usually means somebody is getting rich, but in the case of Napster, it really was only the lawyers fighting for and against it that made any money. The post-Napster ventures of Shawn and Sean are also quite interesting. We know that Sean Parker made his millions from his involvement in Facebook (his involvement is chronicled by Justin Timberlake in The Social Network), and in the end, Fanning was able to make his money as well, in a video game venture. Agree or not with what the two did, and regardless of the validity of the service that Napster provided, it was an ingenious idea, and it was kind of satisfying to see these guys get their money, even if it was for something different. They are very good thinkers.

Downloaded provides a pretty good, unobscured view of Napster. They present both sides of the argument, and even Shawn and Sean are able to see both sides of the argument. They wanted a place where a network of people could share music, and learn about new music, and love new music. They had never planned on it being so massive, and the legal issues quickly caught up with them. It is up to us to decide if we believe that Napster was a good thing, since we got a free product, or a bad thing, because it was essentially stealing from musicians. There could have been more about the artists who openly spoke out against Napster, and those who fought tooth and nail against it. Metallica, Dr. Dre, and Trent Reznor, all have snippets in the film coming out against Napster, but no current interviews were conducted. They all appear in archival footage, which is great (specifically when Reznor is trashing Fred Durst for being an idiot), but it would have been really cool to see their reflections now on the Napster issue, if their views had changed, if they regret anything, and how it all changed because of it. These artists won the war, but they all surely faced fallout in what was perceived as actions against their own fans (I personally don’t believe what these artists did was wrong, they only wanted the credit for what was their hard work).

Now that CDs are pretty much dead, and we get the majority of our music from the Internet, at more legal places such as iTunes, the impact of Napster is plainly visible in our daily lives. Downloaded does a great job at telling the story fairly. By the end, we like the reflective nature of Fanning and Parker, having them realize what they truly had done, and how they overcame the obstacles of doing it in the first place.

As far as documentaries go, Downloaded is great at describing something that is not yet ancient history, but had a dramatic effect on the way the world works now when it comes to music and the Internet. very interesting, and very informative.