Metallica: Through the Never (Film Review)

There definitely aren’t many concert movies that come out any more, especially ones that attempt to intertwine a narrative within a concert that is occurring on the stage.

Metallica, never a band that is afraid to push the boundaries, has done so for their entire career. They have always been willing to try something new, either to the glee or disdain of their fans. They became the most successful heavy metal band in the world by altering their sound into more radio friendly lengths of song, they began making music videos, they wrote some ballads, they had classical influence in their music, even in the early days, they wrote a couple of albums in the 90’s that isolated many fans who felt they had sold out, they released several concert DVDs, they had a film based on their fractured relationship and near-breakup during the days of James Hetfield in rehab. They have seen it all, and done it all, so it was not entirely surprising that they would attempt to make a concert film, in 3D no less.

Metallica: Through the Never was filmed during their most recent world tour, something that have seemingly been doing almost non-stop since 1982. 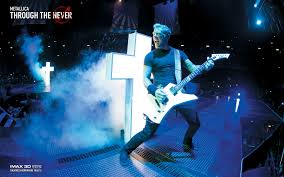 The narrative centers around a young kid, who has a menial job working for the Metallica road crew. While he gets to begin watching the concert, he is asked on a favor for the band, to find one of their vehicles that had run out of gas, and contained a bag that the band really needed. He goes on an adventure, all the while when Metallica is rocking on the stage. He walks into a world that is borderline apocalyptic, yet he always maintains his mission of finding the truck and the bag within.

While the story is a little odd, and often doesn’t even really fit with the things that are happening on the stage, it does provide us with some pretty cool visuals. I never had the chance to see it on the IMAX, or in 3D, but you can easily tell the scenes that would have looked really cool popping out at you while sitting in the theater.

The story is definitely not the best thing I have ever seen, but it never really takes away from the concert, which is good. It doesn’t add a ton, but like I said, some of the visuals are really well done.

As for the concert itself, Metallica is in their usual fine form, hammering through a near flawless show. They maintain their tendency to play some of their songs a little quickly compared to the album versions, but this has always just added to the speed and fury of their live shows. The stage used it another great one, incorporating elements of their past concert tours. There are the crosses from the days of Master of Puppets, the massive, and eventually crumbling, statue of Lady Justice from …And Justice For All, something similar to the Snake Pit from the Black Album days, and they even reuse one of their stunts from the Load tour, in which a couple of roadies get injured when the stage collapses, leading to an intimate finale, with the band in close proximity to one another, as though they are back playing in the garage. 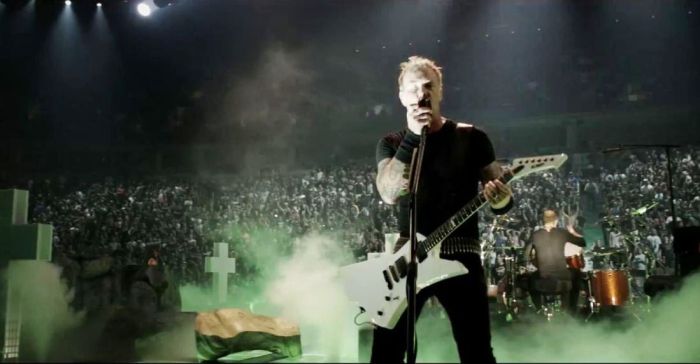 For those who have seen Metallica live, at any stage of their careers, it is always known that the pyrotechnic introduction to “One” is always a highlight of the shows. In Through the Never, it is the best I have ever seen it, with extra explosions, and impressive looking machine gun fire. Very cool.

The setlist provides a little bit of everything for Metallica fans new and old: the usual entry to “The Ecstasy of Gold,” they tear into Creeping Death, For Whom the Bell Tolls, Fuel, Ride the Lightning (which includes an awesome Tesla machine), One, The Memory Remains (one of their most impressive live songs, regardless of your thoughts on Load and Reload, the sing-a-long ending is amazing), Wherever I May Roam (not in its entirety, though), Cyanide, …And Justice For All (I can’t hear this song live enough times), Master of Puppets, Battery (not the full version either), Nothing Else Matters, Enter Sandman, Hit the Lights, and a beautiful conclusion with Orion, during the closing credits, that really shows off the impressive nature of the band’s writing, as well as the incredible skill of bassist Robert Trujilo.

The sound of the concert is very strong, and I happily listened as Hetfield’s guitar came across with the crunch that fans of the band have loved for so long. Despite getting old, and getting a little more grey, Metallica is still able to put on a great show, full of energy, and they are always able to amp up a crowd, regardless of the size. The band is still huge, and they are still on top of their live game, in my opinion.

While a fan of the band probably won’t be watching this one for the story that goes along with the show, it does look cool, and it doesn’t take anything away from the Monsters of Rock on the stage. The concert itself is quite good, and the sound is one of the best parts. Definitely a must watch for all those Metallica fans who have been faithful to the group as they have aged and changed, respecting the fact that they are willing to try something new, and willing to push that envelope.