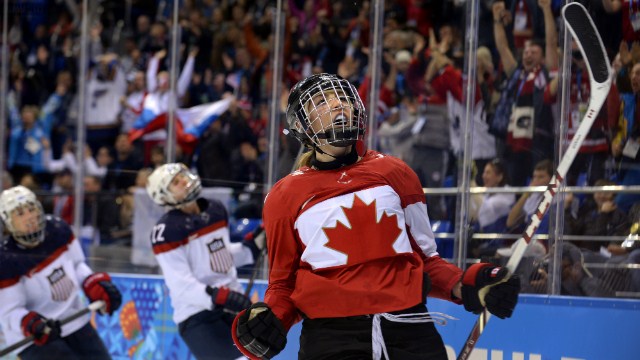 Great week to be a Canadian hockey fan!

First off, there isn’t much to be said about that women’s gold medal hockey game that hasn’t been said already. An absolute classic. The women played their hearts out, and this needs to be considered one of the great rivalries in all of sports. They fought each other tooth and nail, and it was great to see Canada emerge as the gold medal winner for the fourth straight Olympics.

Yes, there were questionable things happen in that game. The penalties at the end and in overtime that went against the Americans were not of the entirely obvious variety (fancy way of saying one was a terribly weak makeup call and the other was going to get called no matter what, the fact they called it cross-checking on the breakaway was laughable).

That ending will go down in Canadian sports history. The goals, the post, the comeback. Amazing hockey.

It was great to hear the entire school erupt when the Canadians got their goals, and make their comeback. I know how excited our staffroom was to watch the overtime at lunch. Amazing.

For the men, there is little bigger than a Canada-US game. Sure, the traditional rival of ours is Russia, but the US is the new one, since Russian hockey seems to have fallen off a cliff in recent years. The US are the enemy, our biggest challenger. Canada’s 1-0 semi-final victory was no way the classic that the women’s duel was, but with that score, it was filled with tense moments, which is strange considering that Canada seemed to absolutely dominate this game.

Despite our lack of goal scoring and finish, how incredible has Team Canada been at possession during these Games? Watching, it seemed like the whole game was played in the American end. Which is perfect. Now, it would be nice if we finished a couple of those possessions with some goals!

An absolute classic week, and we get to look forward to the 5AM (mountain time) wakeup call to see if our men can secure the double hockey gold once again.