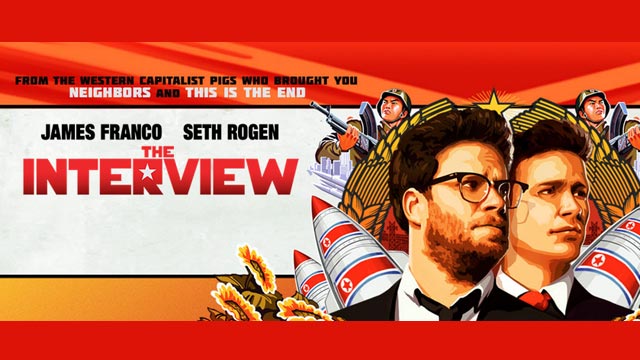 So much controversy, over so little.

When The Interview was set to be released to theaters, it created such a stir that North Korea was deeply offended, and there were threats of terrorist attacks if the film was shown in the local cinemas.

So Hollywood backed down, instead making The Interview nearly immediately available through other sources, like via download and on Netflix, ensuring that people would get to watch the film, and capture the buzz that was surrounding it.

Well, when all is said and done, I can understand why the North Koreans would be upset about the film, as it does not portray them in a very flattering (or unrealistic, mind you) light. And the majority of the film is making fun of their leader. So I guess there’s that as well. But at the end of the day, The Interview is some harmless fun that has a couple of funny moments, while the rest of the film kind of falls in to exactly what you would expect it to be.

James Franco and Seth Rogen are TV people, the on-air talent and the producer, who have the once-in-a-lifetime opportunity to interview the reclusive Kim Jong Un, leader of North Korea, since he is a big fan of Franco’s TV entertainment news show. Since they will be closer to the man than anybody else, the CIA recruits them to try and assassinate the leader.

Seems easy enough, until Franco gets to know Kim, and begins to really like him- or at least the facade- of him.

The Interview is not really a hilarious comedy, although there are a couple of funny scenes. Franco and Rogen are always pretty good together, as we’ve seen in other films, stemming back from their days together on Freaks and Geeks, and Franco in particular plays (overplays) his part to some mild laughs. His first day spent with Kim is pretty funny, to be honest. Rogen plays his usual character, only with fewer great lines than he might be used to. He almost plays the straight man to Franco’s eccentric character.

As far as creating a message, there is nothing really new here. We know the way that things work in North Korea, and it is unfortunate the plight of the people there, living under a dictatorship full of lies and propaganda. The Interview provides us with no new insights or thoughts on how to deal with the questions in North Korea, it uses it more to poke fun at a country that we view as being backwards.

Through and through, The Interview is a 3/5 film. It has its moments of enjoyment, but there is really nothing special here. It gained popularity mostly from the controversy surrounding it, but like most films based on negative buzz, there isn’t much substance there once all is said and done. It is worth a casual watch, just to see what all the fuss is about, but not much more than that.