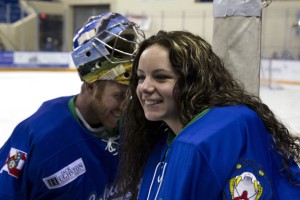 Recently, Canadian women’s hockey goalie Shannon Szabados signed a contract to play with the Columbus Cottonmouths in the Southern Professional Hockey League. She is now one of the few female goalies who will have suited up with a pro men’s hockey team.

Szabados is already a hero to many hockey fans, especially female hockey fans, for helping lead Team Canada to another Olympic gold medal at the Sochi Olympics. Now, she is breaking down the barriers, proving that a female can play with the boys when it comes to hockey.

She suited up for the NHL’s Edmonton Oilers a while back in practice, to fill in when there were a few trades going down and the Oilers were short a goalie. Now, she is a pro goalie in a men’s league, after making her debut the other night. Sure, she may have lost 4-3, but she made 27 saves, and from the accounts I have read, it was a successful start to her men’s pro career.

Szabados is not a gimmick. She can play. This is great for her, and great for young female hockey players, to realize that there are opportunities out there. Sure, these chances are still extremely rare, but it only takes a few to prove so many wrong.

There is a great article on Puck Daddy today about Szabados and the influence she is having on young girls who love hockey. It is quick, and definitely well worth a read.