As a fan of the Boston Red Sox, I should hate Derek Jeter. All Red Sox fans should. He was a great ballplayer, one who tormented the Sox for years and years. During the heyday of the Yankees, he always had his hand in shattering the hopes and dreams of Red Sox Nation time and again, as he led the dreaded Yankees to five World Series titles.

But looking back now, now that we have won three World Series of our own, broken the Curse, and remained one of baseball’s most well-run organizations, it is possible to look back at the career of The Captain with some respect.

Had the Sox never come back from that 3-0 deficit in 2004, and never emerged as champs again in 2007 and 2013, Jeter would probably remain one of the most hated people among Sox fans. But finally, we overcame him and his team, and are champions ourselves, so now we can give him the respect that he deserves.

I know that he is being lauded as such, but I don’t think that Jeter is a top-5 Yankee of all-time. It is impossible to crack that list, with the truly impressive list of some of the best players of all-time sporting the pinstripes during their careers. Despite his Gold Gloves, he was never really the best defensive shortstop out there, and his bat would never destroy you. But his timing would. When there was an incredible play to be made, or a clutch hit to be had, it always seemed that it was #2 doing it.

Off the field, despite having an impressive list of gorgeous A-list girlfriends, a string of beautiful women leaving his apartment, he was never embroiled in controversy, as so many athletic stars are these days. He kept his nose clean, at least to the best of our knowledge. And this allows us to like him even more, because he never became a true villain in the sense of someone like Barry Bonds or Roger Clemens.

We were only able to hate him because he was good.

I watched his final game at Yankee Stadium the other day, and when he came up in the bottom of the ninth, it was almost guaranteed that he would do something. Hitting a walk-off single to secure a victory for his team was pretty much expected. Sure, they may have tossed him a ball that was easy to hit, but he still got it done. And that is all that matters. It was a perfect sendoff for a magnificent career. 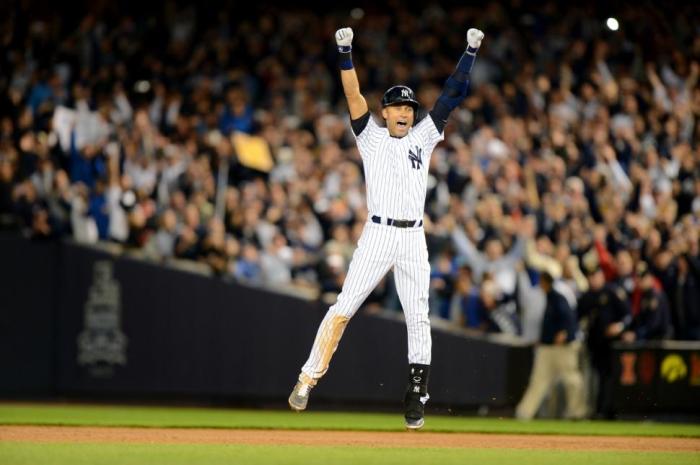 I always liked that he wore #2, now the final single-digit number that a New York Yankee will ever be able to wear, as his will be retired soon. Letting him have that number was a historic move, and he honoured it throughout his career. He does stand with the likes of Ruth, Gehrig, DiMaggio, and Mantle, and that single number on his back was always a symbol of that, of his greatness.

Even as a fan of his most hated rival, it is easy to look at Jeter with respect, and some admiration. He had a great career, and in five years, it is all but guaranteed that we will be seeing him again when he is inducted into the Hall of Fame in Cooperstown.

It is a place that he belongs, among all the other greats of this amazing game, and as much as I don’t want to see another Yankee cap in bronze there, he deserves it, and he belongs there. Even just being the all-time hits leader on such a hallowed team is enough to get him in to Cooperstown, in my opinion.

In a season that served as a year-long sendoff for #2, it has become tiresome reading all of the articles about him. Seeing all of the strange, and somewhat cheesy gifts that teams presented him with over the course of his farewell tour. But now that it is over, with only two games left on his career (being played in Boston, no less), we can really look at him and appreciate what he has done for the game of baseball.

He played, he won, and he did it with class.

Congratulations to Derek Jeter on a great career. I won’t miss seeing you rip the hearts out of Red Sox fans, but I will miss having you be a part of baseball.

Because that’s where a true ballplayer belongs. A part of the game, forever.