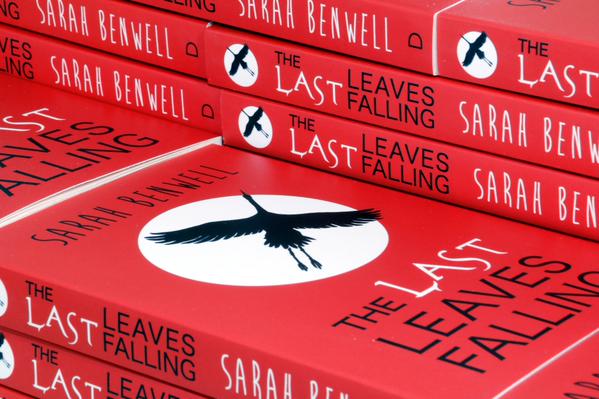 The Last Leaves Falling would fall into the first category: this is a very strong novel, and it tackles the truly heartbreaking and incurable disease of ALS (Lou Gehrig’s Disease).

Typically, ALS is a sickness that befalls the elderly, as it slowly shuts down the body of the person who has it. There is no cure, and it is not a good way to go. After the legs and arms slowly shut themselves down, the disease begins to work on the internal organs of the sufferer, until they are barely able to breathe. People essentially become trapped in their own bodies, able to think clearly, but unable to do anything about it. ALS is brutal, and it doesn’t stop.

It is not happy material.

The Last Leaves Falling takes this disease a step further, giving it to a young man, who must face his imminent death as his body begins working against him. With his amazing and dutiful mother at his side, he withdraws from the world that he no longer feels a part of: he has grown tired of the sympathetic stares, the judging, and growing feelings of uselessness that comes along with the disease. Leaving school, Sora shuts himself inside, rarely wanting to leave the apartment he shares with his mother. He reads books, and he goes online to be a watcher in an online chat forum.

Here, he is able to do something he didn’t think was possible: he made some friends.

Online, and eventually in person, Sora is able to be himself, to the best of his abilities, with his new friends, and they spend some amazing times together, having fun, as kids should do, but at the same time dealing with the issues that come along with ALS.

As Sora worsens, the novel takes a turn when he makes a decision that will impact not only himself, but all of those who know him and care for him.

The Last Leaves Falling is such a strong book for several reasons. The characters come across as real, and the situations that Sora must be a part of are described perfectly. We feel his pain, and understand his sentiments towards those that look at him in his wheelchair. We want to tell him that people aren’t so bad, that they will accept him however he is, but we can’t truly know this, no matter how much we wish it to be true.

The sadness of the novel is ever present, always looming over our likable protagonist, but first time author Sarah Benwell doesn’t smash it into our faces. The disease is there, and always present in Sora’s life, but there is more to this novel than disease and sadness. It is a skillfully written tale of someone trying to come to terms with the hand that life has dealt them, no matter how brutal or unfair it may be.

Sora struggles, and his friends struggle, and his mother struggles.

But there is a conclusion, and one that is worth pouring through the 350-odd pages to get there.

This is a good read, albeit not a terribly happy one. We know what happens with ALS: there is no remission, no remedy, no way to delay the inevitable.