I think we have found a great beach read here, in the mystery novel based on the characters created in the cult TV show Veronica Mars. Originally meant to serve as the basis for the film version that was released earlier this year, The Thousand Dollar Tan Line now works as a sequel to the movie.

The story revolves around Veronica, who is now back in Neptune after her adventures in the film, waiting for her boyfriend, Logan Echolls, to come back from his overseas tour of duty, and working a little bit for her dad, as she tends to do. 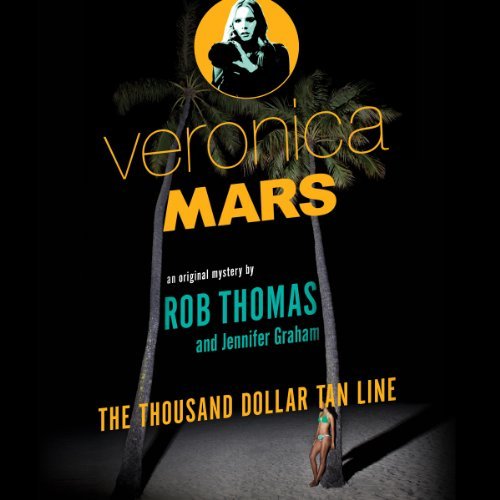 It is set during spring break, where Neptune is invaded by drunken hordes of college age students, ready to blow off some steam. All is going normally, until a couple of co-eds go missing. From here, the mystery unfolds, and Veronica investigates the disappearance, or possible kidnapping, or possible murder, of the two missing girls. It leads her all over Neptune, to large spring break parties, to run ins with the most dangerous drug cartel on earth.

The book is co-written by VM creator Rob Thomas, which allows an in-depth knowledge of the characters in the story. We don’t need the backstory on everybody, like her friends Mac and Wallace, but instead are expected to know about them. That being said, this novel doesn’t need to be only for fans of the show. It is independent enough that the regular reader could get on board as well, because at its core, this is basically just a good mystery read. There is nothing incredible about it, but it reads just like an extended episode of the show. The mystery itself is solid, it keeps the reader guessing for the majority of the story, and it is a pretty fun read.

Credit goes to Kristen Bell, who so perfectly portrayed Veronica on the small and silver screen, that whenever Veronica is speaking, it is impossible not to read it in her voice, with her inflection and nuances to the character. Bell did such a wonderful job in becoming Veronica, that her performance transcends to text as well.

The Thousand Dollar Tan Line is definitely not high end literature, but it will keep you entertained until the end. It is fairly well-written, all of the characters we have grown to love are in the story, and Veronica does what she does. She is still the witty, and edgy, and intelligent, and risk-taking girl that we grew to love on TV.

For fans of Veronica Mars, this mystery novel will be a must have for your summer reading list. Enjoy.